The Talking Stick is a sacred tool used in many Native American Traditions. It allows all people to present their Point of View. The Talking Stick is passed from person to person as they speak and only the person holding the stick is allowed to talk during that time period. Every person must listen closely to the words being spoken, so when their turn comes, they do not repeat unneeded information or ask impertinent questions. Well, OK, that sounds good in theory, but the truth of the matter for me is that I made it for my husband Paul. He claims that my family talks so much, and so fast, and all at the same time, and he never gets a chance to talk at all, so he’s hoping that, with his own Talking Stick, he might have an opportunity to throw in his own 2 cents. Ha, dream on, Paulie….. 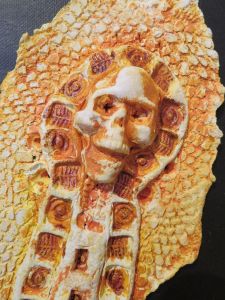