I was so lucky to have a friend come over and play in the studio with me the other day. 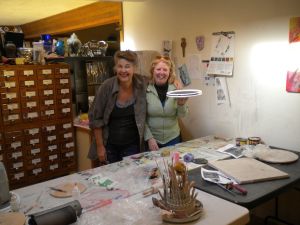 Lauren had the idea of creating wall-hung fish to hang on her yard fence.  I knew that anything she made would be wonderfully, insanely demented.  She’s worked with clay once or twice before with me, and knows the basics, so I gave her very little instruction, and she made the most awesome pieces.  And man, that girl works FAST!!  She was just slammin’ her stuff together, it was awesome!

While offering hints ‘n tips, I was putting together an octopus.  I’d like to make a few for the show that are meant to hang on a wall, and go around corners.  Since I’d never built an octopus before (ha, that sounds sooooooo ridiculous….), this was an experimental piece.  It turned out really well, but had some design flaws that meant it was not a keeper.  Sadly, I forgot to take a picture of it before I smashed it back into a ball of clay.

But fortunately, I DID get a few snaps of Lauren’s crazy fish.  The first one will be chasing the second one, when hung on the fence. 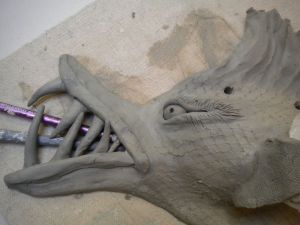 What’s better than being with a friend AND being creative?  Well, maybe sitting in the yard afterwards sipping a glass of wine……..What an awesome day.