Doll Moulds – What a Score!!

I was lucky enough to acquire a whole swack of Doll Moulds for FREE!!!  A couple bought a house and the owner just left them.  To dispose of them at a dump would have cost a fortune, as they are plaster-of-paris and really heavy.  My fabulous husband helped me load them all into the pick up (two loads!), then hump them from the driveway to the back of the house, using a wheelbarrow and a garden wagon.  About 3 hours of work all in – he is a Keeper!!!

I really didn’t have any idea how many moulds I was getting until we arrived at the pickup location.  Here they are in our backyard outdoor kitchen – each mould is for a head, or torso, or arm, or leg, or pair of arms/legs:

By now, I think we’re all pretty clear that is NOT how these moulds are going to be used!  “Bwaaahhaaahaaaaaahaaaa” she laughs demonically…..

Here’s my first three attempts, using the same mould each time.  They don’t look like much yet, but once different colors are washed on/washed off, they’re going to look wicked.  I think that they will all become some sort of Talking Stick: 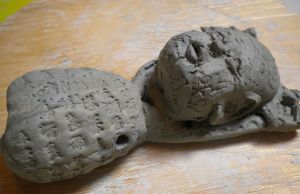 There really ARE too many for me to use, so I’ll try to sell some, as well, but first the monumental task of matching up each Face Mould with the appropriate body, arms, and legs.  They all have really sweet names like Shana and Happy Ricky, and some, but not all of the moulds are marked.  Sorting them will take me a couple days, I think.

Stay tuned, and you’ll see what they look like once they’re fired and colored and adorned with creepy treasures from my stash……………

@CherMcKittrick
View all posts by mckitt123 →
This entry was posted in Clay, Sculpture and tagged clay, creepy, sculpture. Bookmark the permalink.

2 Responses to Doll Moulds – What a Score!!